Showing posts from September, 2020
Show all

Why are football players called goat

However you are football fan or no, you will hear footballers are called goat by their supporters, like Messi, Cristiano and other players.   Even though you are not interested in the game, NO ESCAPE, because the fans are everywhere repeating their chants, so if you are curious to know why football players are called goat Answeraty has the answer. What does goat mean It is maybe weird title, you may think it is used to make fun of footballers, but actually it is a praise to them. Read:   why football squad is 11   It is used to praise great footballers by thier fans. So how this word was created?  Actually the meant term is not the animal 🐐   the meant term is G.O.A.T  It is the shortened word of the phrase "Greatest Of All Time"  However it is not linked to one sport or one player but it is linked more to football, why? How this term entered in football world? It began in 2018, when Messi led his team Barcelona FC to win la Liga (the Spanish League). Then the Argentinian
Read more 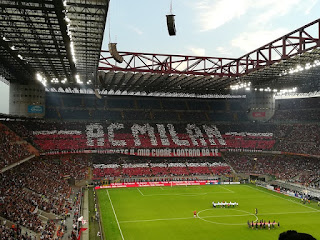 San siro   This article was written by Amar AC Milan and inter are two of the most famous Italian football clubs in the history, not only for their achievements in Italy, but also for their great history in Europe,  they are considered as a great symbol of the Italian football. No one can forget their legends who added a value to the game, let's know more about both teams before answering the question. About inter Internazionale Milano or as it is known ( Inter Milan ) is an Italian football club which was founded in 1908. It is successful team locally and internationally as they could win 30 domestic trophies and 9 international titles. It is the only italian team that never left the serie A.  One of their famous legends is Javier Zanetti About A.C Milan  It is an Italian professional football team, which was founded in 1899, it
Read more
More posts